Who was Allameh Tabatabai

The late Allameh Mohammd Hossein Tabataba'i was born on 16 March, 1904 (29 Dhu al-hijja, 1321 AH), in the Masjed-e-Kaboud Street, Tabriz. His family was renowned for virtue, grandeur, and achievements. His ancestry goes back to such renowned characters as the late Serajeddin Abdulvahab Hasani Hosseini, born in Samarqand, and Sheikh al-Islam of Azerbaijan before the Safavid dynasty. Allameh's mother, Robabeh Khanom, from the Yahyavi Clan of Tabriz, was Gholamali Yahyavi's daughter and from the aristocrats of Tabriz. Mohammad Hossein was only five years old when God endowed him with a brother, Mohammad Hasan. Soon after Mohammad Hasan was born, their mother passed away and in no more than five years, they lost their father. After the death of their parents, the two young brothers continued their lives under the tutelage of one of their kinsmen, Haj Mirza Bagher Ghazi. Being brought up under the guardianship of Ghazi, Mohammad Hossein and his brother began to study the classic books of Golestan and the Qur'an. Then, they enrolled in the classic schools of Tabriz. The brothers continued their studies together and having finished their elementary school, they went to Talebieh Secondary School to take up a study of morphology (sarf), inflexion (tasrif) and jami al-muqaddamat, which lasted until 1925. In this period, they quickly passed the Sat-h courses, but since the syllabi were limited to these books at that time in Tabriz, they left there for Najaf, Iraq.

At the beginning of his studies, still studying morphology and syntax, Mohammad Hossein did not have a considerable interest in pursuing his studies and for the same reason, he faced difficulties in understanding the educational materials. However, after four years, he underwent a huge change and found a great fascination for acquiring knowledge and perfection, in a way that since that time to the end of his 17-year period of studying, he remained enthusiastic about thinking and studying. So largely had he been changed that all the beauties and obscenities of the world and its bitter and sweet events turned to mere trifles to him. He then began to keep company with men of knowledge and, in his food and sleep, found contentment in living a simple life. Many a time he spent all nights long studying. He was always familiar with what was going to be taught in classes because he had already read the textbooks the night before his classes.

In 1925, he travelled to Najaf (Iraq) to complete his studies. There, he attended the classes of Ayatollah Sheikh Mohammad Hossein Esfahani. During this time, he passed a six-year course of Kharej-e Osoul; a four-year course of Kharej-e Feqh, and another eight-year course of Kharej-e Feqh in the classes of the late Ayatollah Naini, and a course in the Kharej-e Osoul. For a short period of time, he attended the kharej-e Osoul of the late Ayatollah Abolhasan Esfahani. He also learned Elm al-Rejal (biographical evaluation) from Ayatollah Hojjat Kouhkamari. Tabataba'i was a student of the then philosopher and sage, Seyyed Hasan Badkoubi; he used to attend Badkoubi's philosophy classes. During his six-year period of studentship, he could read such great volumes as Sabzevari's poetry, Mollasadra's poems, Avicena's Shefa, Aristotle's Othologia, Ibn Taraka's Tamhid al Qawaid, and Ibn Maskawaih's Ethics. Paying great attention to the training of writers, Badkoubi asked Mohammad Hossein Tabataba'i to learn math, thereby nourishing the argumentative thinking and philosophical taste in him. He attended the Imtithal (conformity) classes of the late Seyyed Abulghasem Khansari, the brilliant mathematician of those days. He also attended a number of courses in Discursive Arithmetic, Plane and Spatial Geometry, and Discursive Algebra. 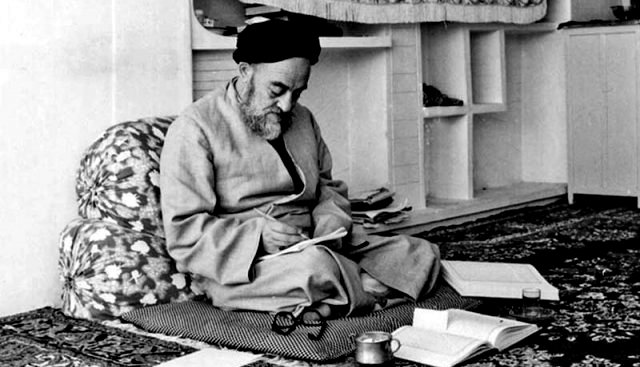 In 1935, Mohammad Hossein was compelled by his financial problems to leave Najaf for his hometown, Tabriz and stay there for ten years. This period was the “hard times” for Mohammad Hossein since it was a period of spiritual torment to him. In this period, he made his living from agriculture and had rarely time for studying. In 1946, once again Mohammad Hossein went to Howzeh Elmiyeh of Qom (seminary) to resume his studies. Though he was, all through his life, struggling with such difficulties and deprivations as orphanage, loneliness, poverty, and other miseries, as he stated, he was always feeling he had the support of an invisible hand, keeping him far away from all pitfalls, as well as guiding him toward the right destination.

While in Najaf, he authored the following brief works/books:

His works authored while he was in Tabriz include:

The works authored in Qom include: